I have been reading a lot lately though now that the weather is nice enough to be able to do some DIY projects like my new desk and my new vanity, I imagine my reading will take a nose dive. I have a few more I really want to get through in the next few weeks. Oh who am I kidding READ.ALL.THE.BOOKS. Here are the books I’ve read this month.

My rating system:
Five Stars: Blew me away, made me want to stay up till 3am to finish, would read again and again or I didn’t find anything I would want to change.

Four Stars: Really good book, fast paced or thought provoking, but may have dragged a bit or left something unresolved 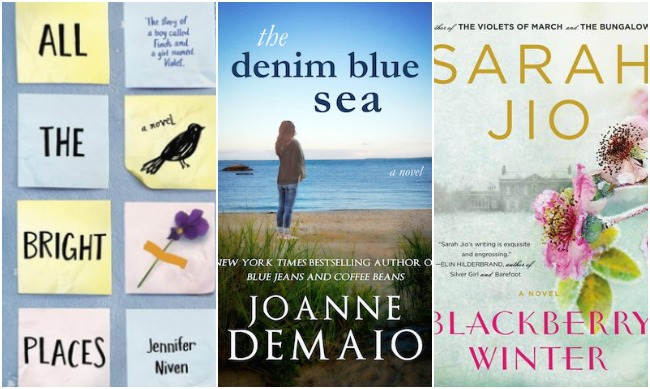 All The Bright Places – Violet and Finch are both consumed with death. Finch with all the ways in which he could die, and Violet with her sisters death, which she feels responsible for happening. They meet at the bell tower at school and Violet becomes the hero, while Finch takes the heat even if that wasn’t how it really happened. They form a friendship and through a school project journey all over their state. This brings a voice to depression, mental illness and the secrets we don’t show the world. So moving and left me in tears.

The Denim Blue Sea – I am a New England Beach bum so I really enjoyed this book. It brings my love of the beach, and my time at the beach to the surface and makes me want to vacation at Stony Point. Read a more detailed review here.

Blackberry Winter – This book was a quick read but it also pulled me in. From the story of Vera, the struggling single mother from the Depression era to Claire a mother in mourning after a tragic accident nearly 80 years later. Each piece of the puzzle of Vera’s missing son, during a surprising May snow storm begins to reveal itself. Claire is the reporter assigned to find a story, while trying to deal with her own marriage and troubles. 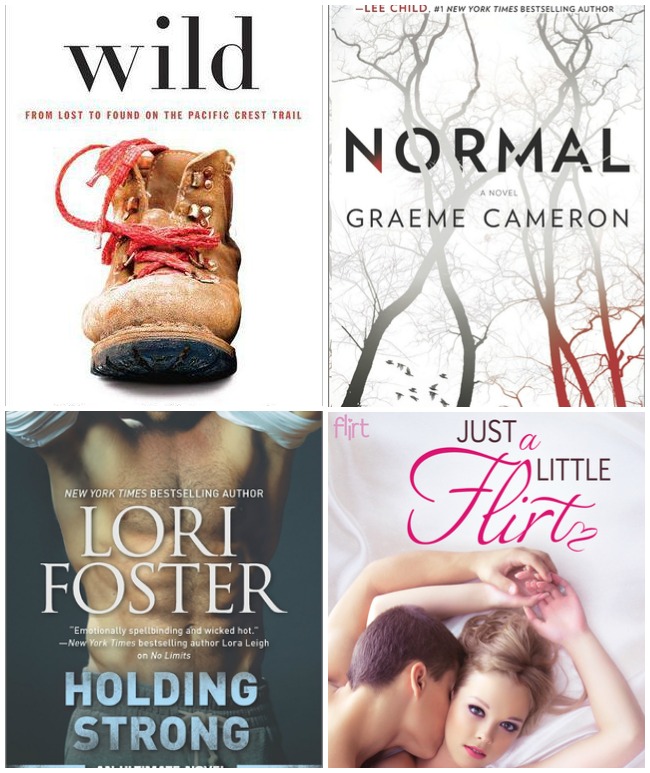 Wild: From Lost to Found on the Pacific Coast Trail – While I felt a portion of the writing was a little bland her journey really inspired me. To hike for 3 months for over 1100 miles, that takes a lot of mental toughness. Read how it inspired me here.

Normal – This book is pulse pounding from the get go. It is told through the point of view of a serial killer and opens with him killing one woman and kidnapping the other, which he keeps in a cage in his basement. It was dark and twisted similar to an episode of Dexter. It does bounce around a bit, which is why I gave it 4 stars, otherwise overall all really enjoyed it.

Holding Strong – Lovers of romance are sure to love this one, Cherry comes off as a flirt because she can’t have the one she wants, Denver an up and coming MMA fighter. He decides he can’t resist her any longer, and one night just isn’t enough. Her past comes back and has the potential to break them up if Cherry doesn’t give in to the protection that Denver gives freely. The other MMA fighters pull a tight circle around Cherry to protect her, making her part of their family. I am looking forward to the other stories in this series.

Just A Little Flirt – I read the first book in this series, Just a Little Crush and wanted to read more about Fallon, wish granted. Fallon wants to focus on this intern and not being the wild child everyone expects her to be. Cade is the to good to be true therapy dog who volunteers at the same place as Fallon. Fallon doesn’t want him to judge her for her past, but even if he doesn’t can she commit?

Ugly Love – I have seen this book all over social media at one point so I gave it a shot. Tate and Miles have instant chemistry even if Tate did find Miles passed out drunk outside her brother’s apartment where since is now staying. Miles wants her but not a relationship, and Tate agrees. The things I didn’t like about this book was that it was very immature in the that Tate is constantly settling for less than she deserves and always trying to talk herself into being in this relationship hoping he will change. The second half redeems the book and the ending was fitting.

Come Home  – Jill is finally happy after a messy divorce, now engaged to a loving man. The daughter of her ex-husband shows up to tell her, that her ex-husband was murdered. This begs the question of just how ex, is an ex and their family. Jill tries to help the daughter even when she seems troubled and wild. This story dragged a lot, and while I liked the overall story it would have been better if edited down.