My favorite day of the month is here…show us your books. I get so many book recommendations to add to my ever growing list of books to read. It’s basically a book lovers Utopia. I had a good mix of books this month. I also want to tell you to check back tomorrow because I have another book review with excerpt and a giveaway. So on to what I read this past month…

*Disclosure: All books this month happened to be provided from NetGalley in exchange for an honest review. I am always going to be honest in how I like the books, good or bad. 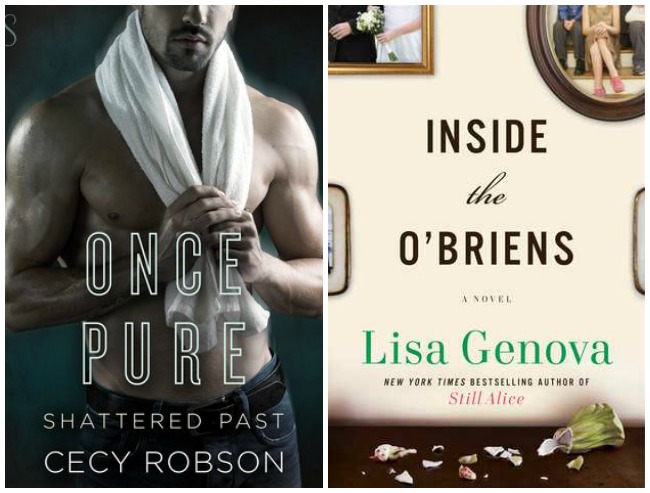 Once Pure – MMA Gym Owner Killian O’Brien lost his chance with Sophia Tres Santos when he was younger but he is determined to try again. Sophia is helping Killian re-build his website and help build his business. Their chemistry is undeniable, for an except and my full review click here.

Inside The O’Briens – I might be a little biased, since this book takes place in a neighborhood in Boston. Joe O’Brien is a tough cop in the city of Boston, a veteran of the force for over 20 years. He begins to experience involuntary movements, unclear thinking, and fits of rage. After his wife pushes him to get checked out he discovers he has a  neurodegenerative disease called Huntington’s disease, and there is no cure. It is also a disease that gives children a 50/50 change of inheriting from their parents, Joe has to tell his 4 children. Each of his kids while in their 20’s struggle to come to the decision to get tested and what it might mean to them. Is the knowing better than not knowing, and how would you embrace life if you had the disease. It also takes you on Joe’s journey of struggling through the disease that ultimately takes his identity, his job and his pride from him. So beautifully written, heartbreaking, but so powerful.

Breath of Scandal  – This book was actually originally published in 1991 but I didn’t feel it was dated, aside from a few stereotypes. This book does have really heavy subject matter. Jade claws her way back to the road determined to get her revenge, in her being run by one family. The sheriff is the father of one of the accusers, her own mother doesn’t stand by her. She moves away to go to college and plan her revenge. She hires Dillon a man on his own road to redemption when she comes back to town to take down everyone involved in destroying her childhood.

Flipped – Holly and Dan meet when Holly breaks into the house that she believes is hers, but Dan stole out from under her. Holly had dreams of restoring the historical home for her and her daughter. Dan is also the brother of one of her best friends, Johnnie, so they can’t get away from each other. Holly is hoping that if she can’t restore the house herself, she can convince Dan to restore the house the way she envisioned it. Great chemistry, cute story and I am excited to read the rest of the series.

Before It’s Too Late – DI Jackman is tasked with finding the student who goes missing Min Li. She just had a fight with her boyfriend, so he is immediately a suspect. When another student goes missing the heat is on to find them. You get to hear Min’s side of the story as she describes being buried alive. I didn’t understand the back story of Jackman’s wife but maybe that is explained in further books, it just seemed to be unnecessary, otherwise great story, loved the back and forth from Min’s telling and Jackman’s. 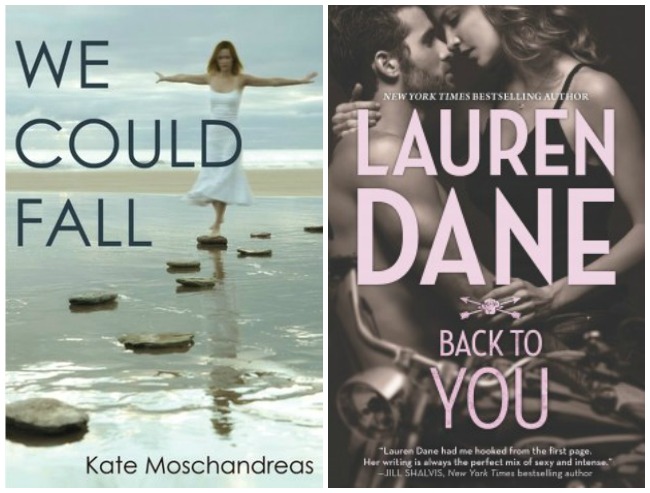 We Could Fall – I received this book from a GoodReads giveaway.  Emmy and her husband Jack had a plan to get a divorce and on a fateful day he decided to tell her he wants to try again. That same she gets a voicemail from a famous actor, Duncan, who wants her as his therapist. There is a certain Mrs. Robinson theme and it even makes references to it. Duncan is so used to shielding every emotion and is working to be more authentic. Emmy and Duncan start to feel a connection but there is also the passive aggression husband to contend with in the end. A little too long but overall kept me engaged.

Back To You – Kelly has dated the rockstar, she even married him and had two kids with him, even divorced him. She is now ready to marry a new man and forget about her ex, Vaughan. Problem is Vaughan doesn’t want to let her go. She can see she is not in love with her fiance, he is just a safe choice. Vaughan begins to prove to Kelly he can be the father and family man that she needs him to be. I didn’t dislike this book at all, it just didn’t really have an arc or pull of emotion, just fell a little flat but I did root for them to find each again.