Happy Hump Day!! If you caught my post from yesterday you know I read a lot, daily. I love the opportunity to read advanced copies of books, and to read more from an author I enjoyed. Today I am sharing the book Risk It by Jennifer Chance.

The publisher was also kind enough to host a giveaway for Flirt and Loveswept mugs and multiple eBooks. Checkout the giveaway at the end of the post. If you like happily ever after stories with a harder edge this is a book for you.

The is nothing Dani likes better than pulling the ultimate con, she meets Rand Sterling Winston IV during a art exhibit convincing him to buy a painting three times its worth. She must hand deliver it though and he proposes a no strings attached affair. Dani’s hasn’t always had the easiest life and when her foster brother is in trouble she always jumps in to help. Rand is from a privelaged background but even he has his secrets. They may just be able to heal each other.

“I really must be going.” Dani turned, offering a smile. She had a clear run at the door, and she gestured to the painting. “I hope you enjoy it.”

“Let me get you a receipt.”

“I insist.” Rand turned to his desk, swiveling the notepad around and tearing free a loose sheet. He jotted down a quick note of thanks, signed and dated it. Dani had followed him to the desk.

“Truly, it isn’t necessary, Mr. Winston,” she said as he handed it to her. She opened her purse, and he heard the telltale buzz of her silenced phone. She didn’t even look at it, but the effect it had on her was instantaneous, her artfully easy manner now going tight as a drum.

“Necessary,” he mused, and something in his voice made her glance up sharply. The shiver of control it took for her to not step back from him was obvious, but Rand wasn’t about to let her get away a second time. “And do you always do only what is necessary?”

“Saves time,” she said again. But her eyes were on his lips, and he felt the attraction between them like a living thing. He lifted a hand, and while her body didn’t flinch, her eyes did.

Another surge of emotion blazed through him, this one hotter, less controlled. He didn’t understand that flinch of hers, the reflex she could not quite quell. But he knew the reaction wasn’t about him, and he wanted her to only think of him in this moment—to have the same intensity of emotion, the same nerves, the same trepidation, even a little fear. He didn’t mind her fearing him. He expected it. But the nature of that fear was what intrigued him.

“Ah, fuck it,” Dani said, startling him again. She stepped into his body, reaching up to draw his head toward hers. “I don’t have all goddamned night.”

She kissed him, hard, and the spears of desire touched together at their tips, igniting Rand with need. Still, he didn’t move forward, just let Dani pull him closer in, sensing that the deepening of the kiss was something she hadn’t planned for. His hands went naturally to her waist, and felt large against the curve of her hips, anchoring her almost possessively. She pulled away—or tried to, her body leaning back even as he kept her still and tight. Her smile was satisfied against his lips, and understanding lit through him. She’d won, he realized. By controlling the kiss between them, by taking the initiative and coming to him, instead of waiting for him to come to her, she had won.

“Was that what you wanted, Miss Michaels?” he asked, and he deliberately kept the teasing challenge in his voice.

She drew in a sharp breath, but didn’t take the bait. “Everything I could have hoped for,” she said, leaning back with a smug grin.

He lifted his brows. “Did I just experience sexual harassment?”

Dani’s smile flashed a little more broadly now. “I do apologize, sir. I was just so swept away.”

“Hmm.” He eyed her. “You didn’t seem terribly swept away. I must be losing my touch. Perhaps I should try again.”

“No, no. That won’t be necessary,” Dani’s words were a little too quick, a little too breathless, and she seemed to know it. She licked her lips, then colored at that action as well. “If we’re finished here, I’ll be on my way.”

“But we’re not finished here.” Rand could feel the heat radiating off her, liquid with intensity, and he dipped his head lower. “And you don’t strike me as someone who leaves the game before it’s done.”

“And yet I really need to be going.”

“You can leave at any time, Miss Michaels.” And it was true. He’d dropped his hands from her hips and she just stood there now in the lee of his body, her eyes fixed on his. Her breathing was unsteady, and a pulse jumped just below her jaw, her breasts rising and falling beneath the narrow slit of her neckline. Her reaction to him was undeniable, and Rand’s resulting determination was direct and absolute. Dani Michaels was going to be his. He could see his hands moving over her body, trapping those breasts in his hands, squeezing them, his fingers teasing the tender nipples until she stood on tiptoe, her mouth slack with need for him, her skin shimmering with heat.

He hovered over her lips, waiting for her to break, and Dani stood frozen before him. He was letting her make the final call, but there was no way anyone would believe she was winning this round.

Not by a long shot.

“Shall I kiss you again?” Rand brushed his lips against hers and they opened on a sigh. He curved his mouth into a hard smile. “I’ll take that as a yes.” 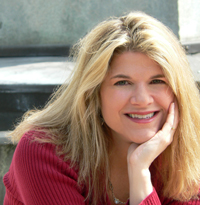 Jennifer Chance is the award-winning author of the new adult Rule Breakers series. A lover of books, romance, and happily-ever-afters, she lives and writes in Ohio.