Seamus doesn’t do well with strangers. I have worked on him as much as possible in the 7 years that I have had him but he is still a little fearful. He is so much better from when I first adopted him. On Monday Seamus was attacked. A Black Lab came charging out from their yard barking and latched on to Seamus. A young girl followed and was just standing there not grabbing her dog, I yelled at her “What is wrong with you, grab your dog” (not my proudest moment).

I pulled the two dogs apart, and she finally snapped to it grabbing her dog and I grabbed Seamus. He was yelping, shaking and covered in saliva. He also urinated all over himself. The girl got her Mom while putting her dog away. I checked Seamus for bites or blood but couldn’t see anything through all his fur. I was just around the corner from home and took Seamus home and watched him, every time I tried to check him he yelped so I tried to give him space, and he rested.

In the morning he whined when my alarm went off when normally he barks all excited to go for a walk. I decided to give him a bath so I could flatten down his fur and check him further and I found two areas that were red and one was leaking fluid. 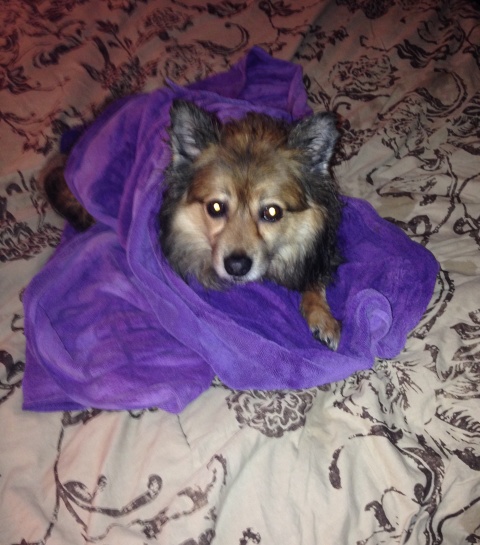 I decided he needed to be checked out so I took him to the vet. One was a puncture from the tooth of the Lab and one was more a scrape. He is on pain meds, antibiotics and warm compresses. So long as it doesn’t get infected he will be fine. I can’t tell you the number of times I cried that day. 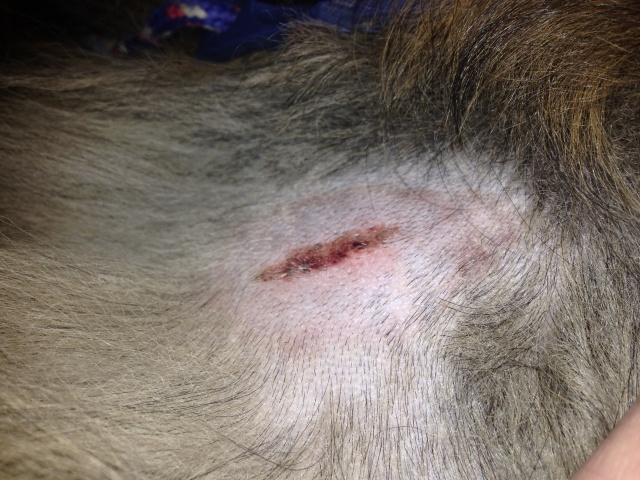 I went back to the owner’s house on Tuesday afternoon to get proof of the dogs rabies shots. She was very nice and the dog was updated on everything. She started to cry and we hugged. I told her I completely understand and it happens and to just make sure her dog is always on a leash. Nothing will happen to her dog unless he bites other dogs. I tried to assure her it was all going to be ok. I felt bad because I know how much our animals mean to us and although her dog should have been leashed it was an accident.

I am sharing this if only to say how very important it is to always have your dog on a leash when not in a fenced in yard. You never know what will set your dog off. She did say that her dog reacted to a Husky before but never a little dog.  There is a leash law in Massachusetts and it really should be followed even if just for a short walk. This is not the first time dogs (Labs, Golden Retrievers, and Chihuahuas) have charged after Seamus when not on a leash but the first time one has actually bitten him.

I leave you with this one that I posted on Instagram just to show even after being bitten Seamus is still willing to indulge me in showing off a smile. Just think he was the one no-one wanted and he got bit by a Black Lab. Never judge a book by its cover, Seamus is a good egg.

Linking up with Kathy from Vodka and Soda for Humpday Confession.