One of my best friends also know as Lynnie (Lynn to those who aren’t cool enough to know her yet) offered to post a recipe that she recently tried to lighten my load a bit since I have been running around a little too much lately. So who am I to turn down free help!! So be kind and show her some love in the comments.

As working mom of a toddler I am all about crock-pot recipes. I was a little concerned about how this would turnout since I was mixing the ingredients into the crockpot while simultaneously making tacos and accidentally dumped a portion of the taco seasoning in the chicken dish when I thought it was ranch dip mix. Oops! Despite that mess up this recipe was a huge success with my little one, my husband and my father-in-law. I will definitely make it again. 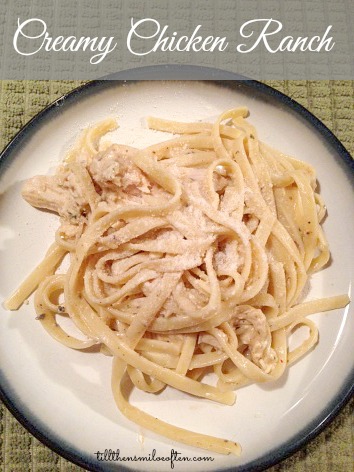 1.     Spray slow cooker with cooking spray (this will save you some serious scrubbing later).

2.     Place chicken in the bottom of the slow cooker and sprinkle evenly with salt, pepper, and paprika.

3.     Add in the packet of ranch dip mix over chicken, and top with the chicken broth.

Be sure it is ranch not taco seasoning like what I did! 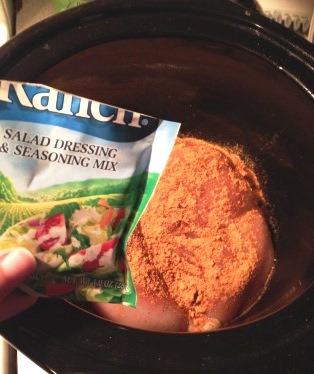 5.     Thirty minutes before serving, mix 1/3 cup half & half with 1 teaspoon of cornstarch. Add to slow cooker and mix.  Sprinkle on 1/2 teaspoon oregano and 1 teaspoon parsley.

6.     Cube 3 ounces of cream cheese and distribute evenly in the liquid in the slow cooker. Replace lid and cook for an additional 20-25 minutes.

7.     Remove chicken to platter, stir sauce and pour over pasta. For a low-carb meal, serve with a fresh green salad, or steamed vegetables.

I boiled fettuccine, drained and then put pasta and chicken mixture in one pot and stirred it all together. Then, of course, sprinkled with Parmesan. 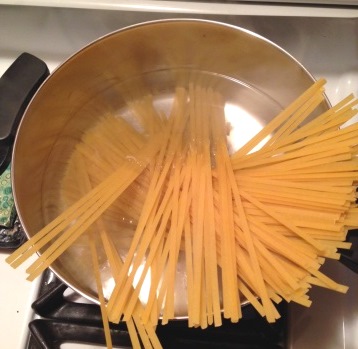 It was delicious like that but I thought it would be great with a vegetable. So for leftover food night I sautéed some mushrooms and then added it to the dish that I heated in the microwave. It was great before but the mushrooms made it even better! I’ve never been a guest blogger and now realize more pictures would have been good. Oh well, I hope you like the recipe as much as I did.

Thank Lynnie for guest blogging. She did awesome and that sounds delicious. For me I would serve over spaghetti squash and add some broccoli since I am a huge broccoli fan and I don’t eat pasta but I love that it is so easy to add your own flair to it, like she would with the mushrooms. Who doesn’t love a crockpot meal?!