I posted a few weeks back that I was reading The Husband’s Secret by Liane Moriarity and so I am linking up with Kay from Best Intentions for blogger book club with my review of this book. 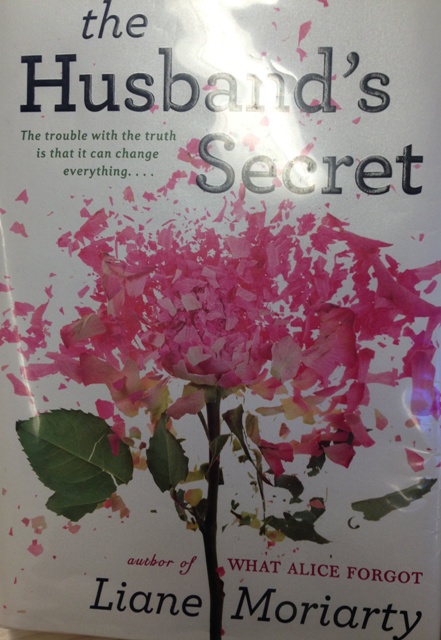 I had a really hard time coming up with how I felt about this book. I guess it is a good thing that the book stayed with me, but also not good that it didn’t make me feel one way or the other.

Excerpt from Goodreads: My Darling Cecilia
If you’re reading this, then I’ve died . . .

Imagine your husband wrote you a letter, to be opened after his death. Imagine, too, that the letter contains his deepest, darkest secret – something so terrible it would destroy not just the life you built together, but the lives of others too. Imagine, then, that you stumble across that letter while your husband is still very much alive . . .

Cecilia Fitzpatrick achieved it all – she’s an incredibly successful business woman, a pillar of her small community and a devoted wife and mother. Her life is as orderly and spotless as her home. But that letter is about to change everything, and not just for her: Rachel and Tess barely know Cecilia – or each other – but they too are about to feel the earth-shattering repercussions of her husband’s devastating secret.

The main character appears to be Cecilia with her perfect life, perfect husband, perfect children, and perfect career. Her world is shattered when she discovers a letter written by her husband. It isn’t until she mentions it to her husband and his pretend indifference of her tossing the letter as it was just a silly whim that her life is shattered.

Opening that letter brings her life intersecting with Rachel the school secretary who lost her daughter at the age of 17 in a violent manner. She pegs the murderer as the physical education teacher Connor (I think that was his name?) who looks at her with “guilt in his eyes” when he looks at her. She spirals out of control wanting to prove he did it.

Tess enters her son into the mix when enrolling him in school. Tess has fled to her mother’s in an escape to her husbands admission that he has fallen in love with her cousin and their business partner.  Tess knew Connor previously and dated shortly.

The secret takes awhile to come out and with not much flair.  The telling is more so in how they deal with the secret and the decision of what would you do to protect your family. I felt that every intersecting character was well written and you got a sense of each person however after 300+ pages the ending was “neatly” wrapped up in a nice package in the last few pages and the Epilogue. I think my hardest part of liking or not liking this story is that I didn’t like the ending. I didn’t like how the characters chose their future. I felt I knew them through the telling of the story and I liked them as characters but in choosing their futures I didn’t really care for them at all.  Some just gave up in such a weak way, and others were vindictive and holier than though.

I guess you will never know what you will do if you were to actually be in their shoes but in the telling of the ending I couldn’t see myself making any of the choices any of the women made. So in that I had a hard time deciding how I felt about this book. I do feel it is worth a read.

Questions I came up with to go along this book:

Would/Have you stay/ed with someone who cheated on you? Is it cheating if it is emotional but not sexual?

Is there anything you wouldn’t do for family?

Do you forgive completely or with conditions?

If you saw someone commit a crime would you report it? Any reason why you wouldn’t report it?