I have to say I was a little boring this weekend but it was really what I needed after last week. Between the flooding, the snow and being sick I really needed a weekend of doing nothing. 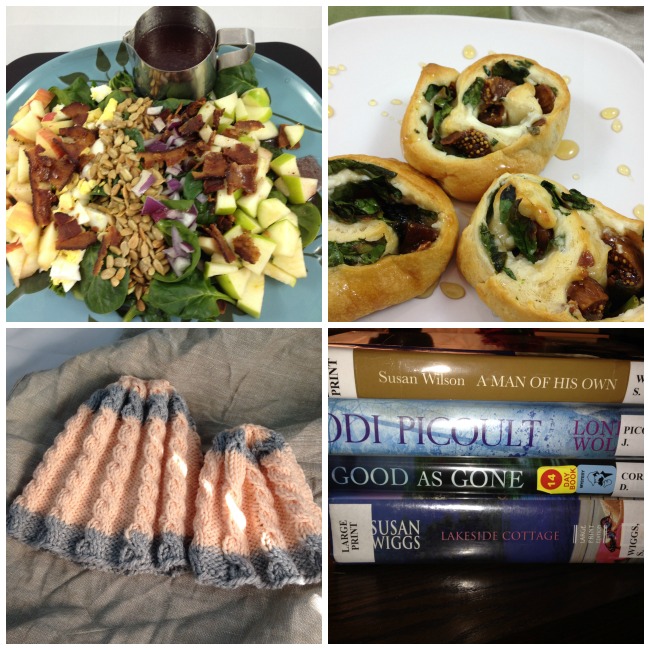 Saturday: I spent the morning watched an obscene amount of American Horror Story on Netflix. Last week I realized I watched the whole new season but never watched the first 2 seasons.  I did make a really good salad for lunch though. I didn’t get moving until 3pm, but I had just enough time to get to the library and pick up some new books. It felt a little odd not to have a book to read, and now I have four to get started. Then I did some crazy quick cleaning (I get all my energy in the afternoons) including vacumming, cleaning the bathroom (the one I have left, haha), laundry and dishes. I then began taste testing for a new recipe I am working on. It started with the idea of making a pinwheel dish. I really wanted to use fig and spinach. The first batch was a little too sweet and gritty though it wasn’t bad it just wasn’t what I was going for originally. I spent the rest of the night watching TV and knitting.

Sunday: This day was all about rest. I had some more cleaning to do, but really I watched a lot of TV. I did get my grocery shopping done early and did a second batch of the pinwheels for lunch and it was even better and really more what I was going for, it was creamier and richer. I can’t wait to share the recipe. The rest of the day was watching movies, snuggling with Seamus and finishes any cleaning I didn’t finish yesterday.

Very relaxing, and not a lot of running around, which I really needed.

*As I was getting a few things ready for work at night I came across an old box of odds and ends. In it was an old letter my Dad wrote me while I was in college. I think it was for mid-terms or maybe when I was really homesick. It was really about the road he took and that he believed in me even if I didn’t believe in myself. It left me bawling. I never would have made it through college without his support and all he sacrificed. So just putting this in to give him props, he deserves it.

What were you up to this weekend?
Linking up with Leeann from Join the Gossip